PAY LESS PER ROUND WITH OUR FREQUENT SHOOTER PROGRAM 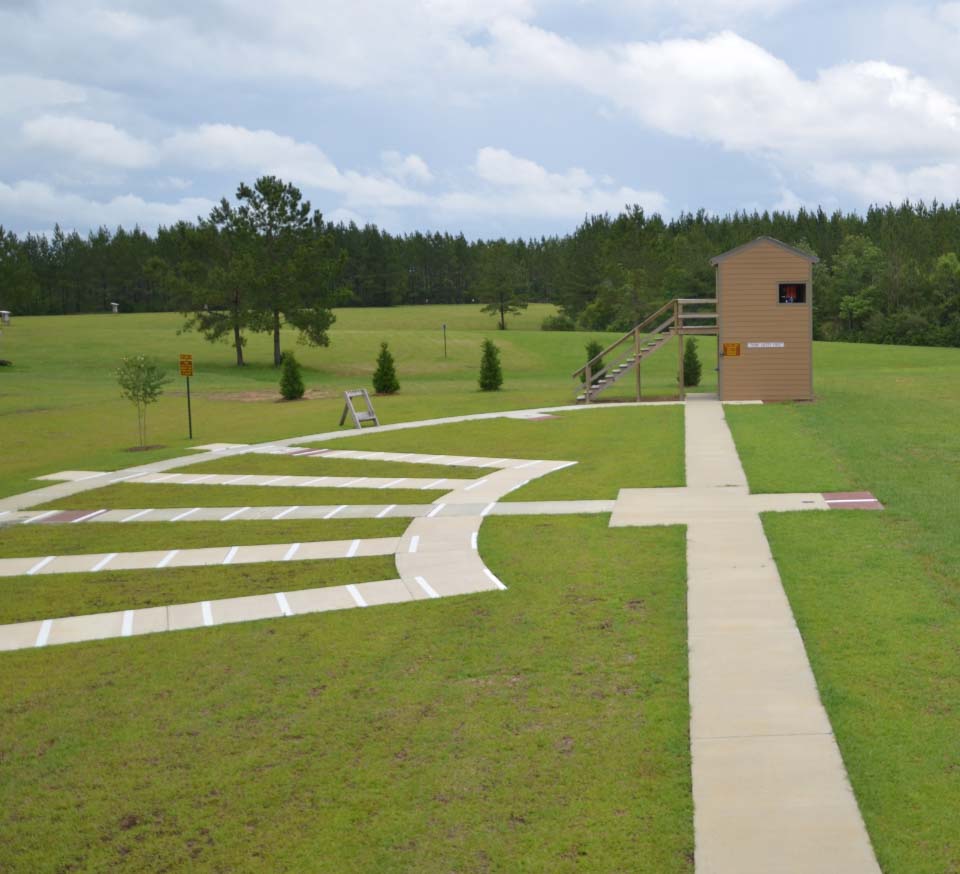 A round of skeet consists of 25 targets in a set sequence of singles and simultaneous doubles. Squads of five shooters take their turns from eight shooting stations. Each squad member takes two singles and one double from stations 1, 2, 6, and 7. Two singles are taken from stations 3, 4, 5, and 8. The 25th target is taken after the first target is missed or as a final target (low house #8) after 24 kills. Targets are thrown a distance of 60 yards.

Variations in the angles of the targets presented from the “high” and “low” house result from the shooter moving from station to station. American Skeet is the only discipline that has regular, specific tournament events for sub-bore shotguns: 20, 28, and .410.

NEVER GO PAST THE HOUSES INTO THE FIELD 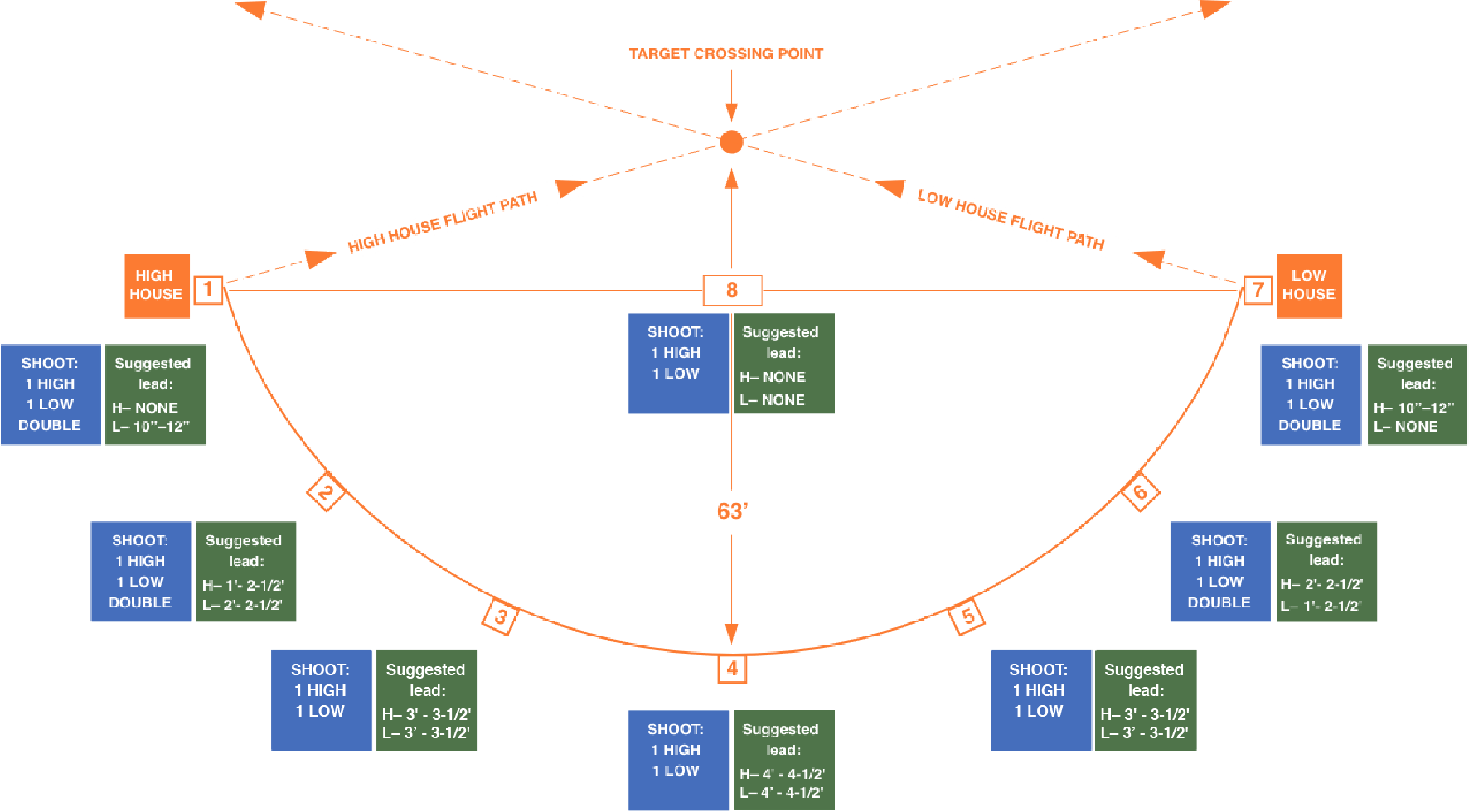 Shooters, in squads of five, start on station 1, shooting one pair of doubles each to station 7. Then they reverse, shooting one pair each from stations 7 through 1. On station 4, shooters must shoot the high house target first. On reversing, (shooting 7 through 1), they must shoot the low house target first. In tournaments, the events are on a total of 50 (or 100) targets with the last pair shot on station 1. Unlike regular skeet, in Doubles there is no option which is shot when the first target of a round is missed. Scoring is one point per hit target.

The video below shows the single targets from each station. Notice the hold points where the gun starts, the look points in the red ovals and how the gun stays ahead of the target throughout the shot sequence. The video is best viewed in half speed or less. 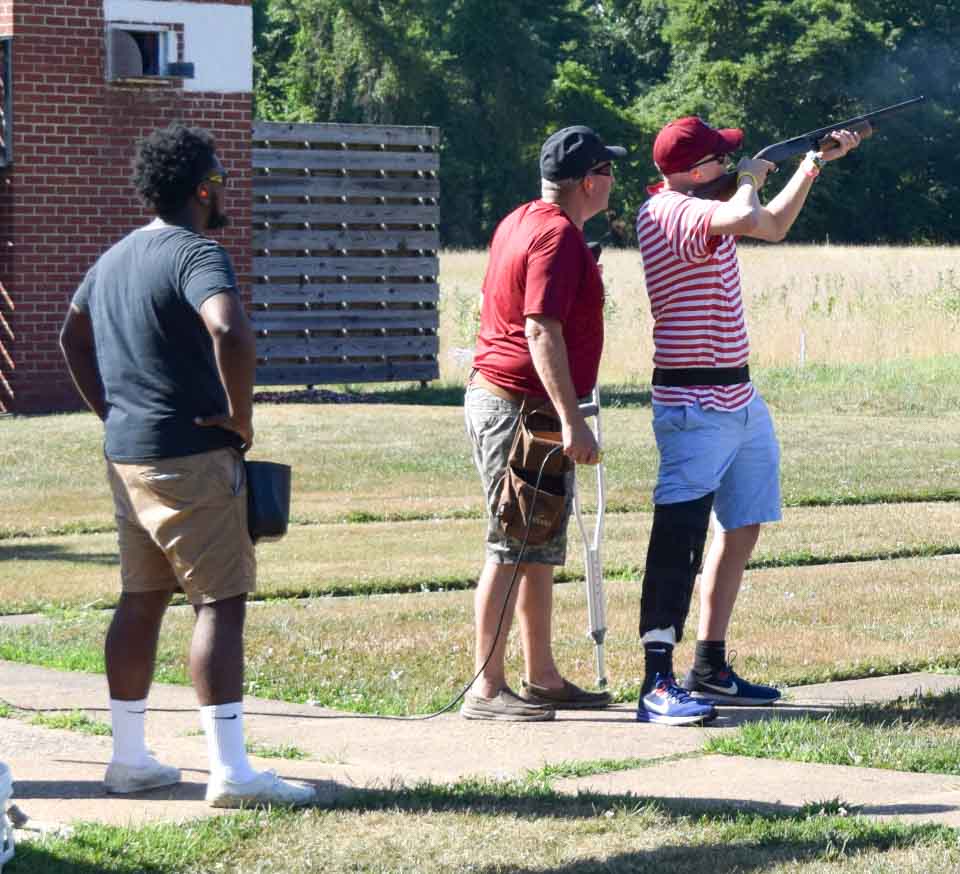 LRSTC has the only, open International Skeet field in Maryland. Available on field #6 by request. The decision on whether the field can be converted over at any given time is determined by the club manager. You can request this at the front desk.

The official sanctioning body for Olympic International shooting and record keeping is USA Shooting. Membership is $40/yr. A good novice score is 65/100. Shoot in the high 90’s and expect to be recruited for the Olympics. Even the best in the world rarely scores 100%.

HOW IS INTERNATIONAL SKEET DIFFERENT FROM AMERICAN SKEET?

Targets are about 30% faster. Targets should hit 72 yard, “striped” marker poles. The game is low gun with the stock toe touching waist at elbow level. All easy incoming targets are eliminated. Random delayed pulling, 0 – 3 seconds. There is no “first miss” option shot or established “first bird dead” on doubles. Max: 7/8 oz. of shot usually at 1,350 f/sec

NEVER GO PAST THE HOUSES INTO THE FIELD

What is Modified International Skeet?

Modified International SKeet is the same as Olympic Style except that the target speed is reduced to American skeet speed and up to 1 1/8 oz. loads are acceptable. This allows it to be shot on any of our skeet fields at any time using the shooting sequence above.

At home practice:
Please insure that your gun is unloaded.
In low-gun stance, point barrel bead on a ceiling corner that will replicate the height of a normal target. Slowly lift and mount the stock while keeping the bead on the corner spot. Gripping the stock tightly will cause the bead to move off target – be gentle. Increase speed as skill improves. Then practice lift and swing mount while keeping bead along the ceiling/wall line. Start very slowly and increase speed with success. Use a gentle stock grip. Expect arms to get tired very quickly.

Hit more clays with the help from our expert shooters

New to skeet shooting? Learn the ropes with our New Shooter Introduction course.

Already familiar with skeet shooting and want to get better? Sign up for a private individual or group lesson!

New to skeet shooting? Learn the ropes with our New Shooter Introduction course.

Already familiar with skeet shooting and want to get better? Sign up for a private individual or group lesson!